Ever wonder how a PGA Tour player chooses the right Titleist golf ball for his game? On Tour, with so much at stake, a player’s confidence in his golf ball has got to be 100% bullet-proof. Reaching that level of comfort requires a committed team effort, as players work side by side with the Titleist R&D team to evaluate every shot in a player’s bag and every playing condition imaginable.

Join Team Titleist as we tag along for a recent golf ball testing session with one of the game's brightest stars, Justin Thomas, and see how he put the New 2019 Pro V1 and Pro V1x golf balls to the test at his home course, The Bear’s Club in Jupiter, Florida.

With the help of his father and coach, PGA Professional Mike Thomas, and Titleist Tour Consultant for Golf Ball Performance, Fordie Pitts, Justin evaluates how the 2019 Pro V1 and Pro V1x feel, fly, spin and react on the green when he plays the precise chips and pitch shots that he’ll need to count on in every round in 2019.

In the first phase of his recent golf ball testing session, Justin Thomas started around the green, evaluating how the new 2019 Pro V1 and Pro V1x golf balls performed in the short game. Once Titleist Tour Consultant for Golf Ball Performance, Fordie Pitts, recorded JT's results and feedback, it was on to phase two - full shots with wedges and short irons.

Using a Trackman launch monitor to capture flight data on each shot, Justin worked through a variety of shots to see how well he could control the distance, trajectory and spin with his Vokey wedges and his 718 MB 9-iron and 8-iron. Titleist Director of Club Promotion on Tour, JJ Van Wezenbeeck, stayed greenside with a walkie-talkie, watching each shot land and relaying back to Justin and Fordie where each ball landed and how it reacted and spun on the putting surface. 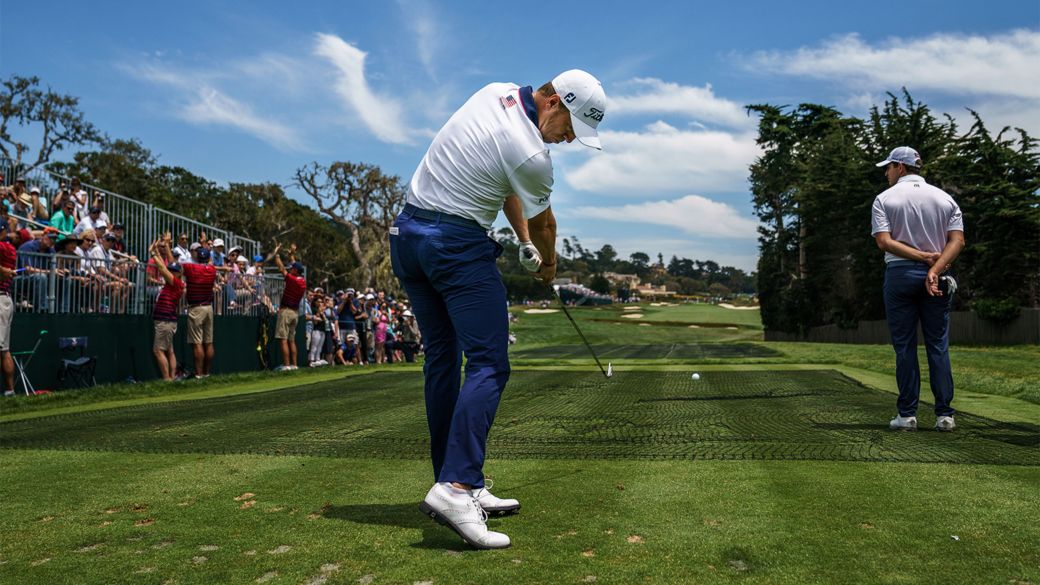 The world's best short iron players are sensitive to their launch window, and want to see their golf ball fly through a specific section of the sky that they picture as they visualise an approach shot. However, in Titleist R&D, we've learned that angle of descent is just as important when it comes to the scoring clubs. If the angle of descent is too low, the ball will skid and bound forward, towards the back of the green. If the angle is too high, the ball will strike the green and spin backward, towards the front and sometimes even off of the green.

In this part of the golf ball evaluation Justin's team is looking for a piercing flight (with a touch more spin) that descends into the green at an angle that will result in shots that Drop-and-StopTM. This is a hallmark of Pro V1 and Pro V1x performance in which the ball comes to rest very close to where it first impacts the green. The 2019 Pro V1 or Pro V1x model that provides this will give JT the freedom to take dead aim and know that a well executed shot is going to result in a great opportunity for birdie.

As he continues his evaluation of new 2019 Pro V1 and Pro V1x golf balls, Justin Thomas is following the Titleist approach to golf ball fitting to a tee, starting around the green and moving back. With a solid understanding of how each ball performs on chips, pitches and green-light approaches with the scoring clubs, Justin and team now take a look at how the new V and X perform with mid-irons.

As Tour players face longer approach shots with their 7, 6 and 5-irons, the ability to control trajectory and work the ball becomes a much more important consideration. On approaches with the shorter irons, players like Justin are aggressive and will typically take dead aim at pins. With longer iron shots, though, players tend to aim for the fat part of the green and curve the ball right or left to work the shot closer to tucked pins.

Similarly, players will often adjust their trajectory on mid-iron approaches to access hole locations, flighting shots down to attack pins in the back sections of greens and hitting higher approaches to front pin locations.

When Justin executes his mid-iron shots perfectly, he expects any ball to give him plenty of birdie opportunities. But golf is really a game of misses. When Justin doesn't pull off a mid-iron shot exactly as he planned, the wrong ball could leave him bunkered, in thick rough or worse. The right ball, 2019 Pro V1 or Pro V1x, will still leave him on the putting surface.

Now that he's evaluated how the new 2019 Pro V1 and Pro V1x golf balls perform with the scoring shots - iron approaches, full wedges and finesse shots around the green - it's time for Justin Thomas to go big and launch the new models off the tee.

The driver session begins using a TrackMan monitor to get some baseline data on the launch, spin and ball speed numbers that each new model can provide. Justin and team are interested in finding which model will optimise his carry and roll-out when he catches a drive "right on the screws" with his new TS3 driver. But just as importantly, they're looking for the ball that flies through his precise window and matches the shape that he envisions when he plays a power cut, the shot Justin relies on when he's under the gun and needs to find the fairway.

As he checks the boxes with each swing, Justin knows he's getting very close to identifying the model that will perform best for him off the tee, and in every phase of the game.

Justin Thomas has now seen how the the new 2019 Pro V1 and Pro V1x perform for every aspect of his game - chips and pitch shots around the green, full wedges and iron approaches from the fairway and tee shots with his new TS3 driver. In the final stage of his evaluation, Justin and team now head to the golf course for a thorough examination of the new models under real playing conditions.

Testing and comparing golf balls on the golf course is the most important phase of the golf ball fitting process because it reveals subtleties that can't be discerned on the practice range.

How well does the golf ball perform in a variety of winds? Can I control the ball flight and hit high shots and low shots easily? Can I trust carry distances and work the ball to attack tucked pins? In the short game can I make the ball stop on a dime? Or check and release if that's what the shot calls for? These are all questions that Justin asked of both models as he teed it up a few weeks ago.

"We were able to look a the new Pro V1 and Pro V1x, trying to find a ball that may benefit me and we feel like we did that," Justin said. "I’m very excited for next year. Hopefully it holds a lot of great things for us."